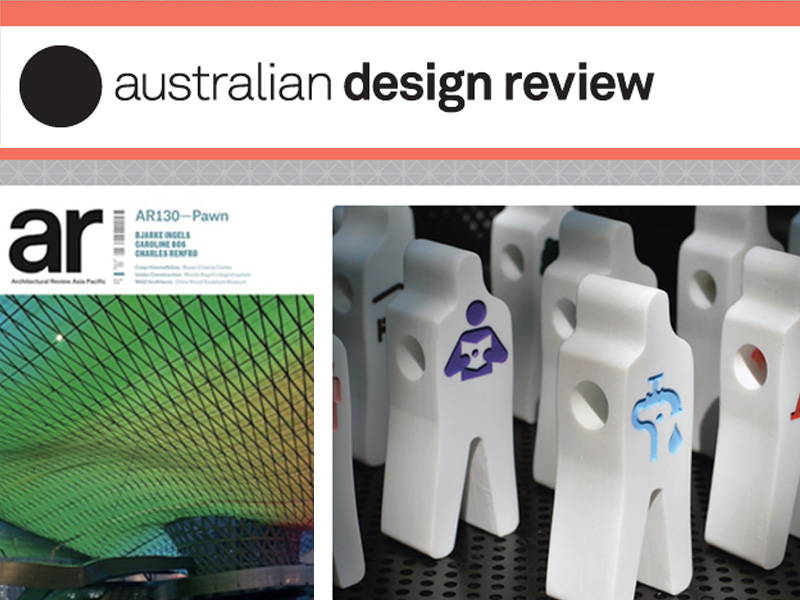 No doubt inspired by the success of their collaborative Arena Calcetto installation at the 2012 Venice Architecture Biennale, our friends Claire McCaughan & Lucy Humphrey from Archrival put together this piece “Ultridisciplinary Futures” featuring VisionArc and others for issue 130 of Architecture Review Asia Pacific. As it describes, the piece seeks to offer profiles of design praxis that “explore an ‘ultradisciplinary’ future, which surpasses the previously specified extent and limits of practice.”

Lucy Humphrey and Claire McCaughan of Archrival explore an ‘ultradisciplinary’ future, which surpasses the previously specified extent and limits of practice.

Architecture is a relatively newly defined profession and the practice of architecture, historically, is not a precisely defined term. ‘The architect’ has drifted between master-builder, engineer and artist for centuries, and it was not until the 1800s that the modern day profession was established. Today the profession of architecture has been described as being in a state of crisis and Archrival considers this to be the result of an ill-defined contemporary profession, one that is further limited by reinforcing ideas of practicing ‘within’ or ‘outside’ of a professional boundary. Without actively promoting a broader idea of practice, we fuel an ongoing identity crisis; and without challenging contemporary practice we cannot realistically define a strategic response to the discipline’s crisis.

Documents such as ‘The Future for Architects?’ report by Building Futures provide background and statistics about how architectural practice will operate or decline in a changing world. In response, many architects are developing ‘new practices’ and expanding their reach by working in ‘interdisciplinary roles’. As an exhibitor in Formations: New Practices in Australian Architecture at the 13th Venice International Architecture Biennale, Archrival strategically concerned itself with exploring and challenging traditional practice boundaries.

In seeking co-contributors for the Arena Calcetto installation, Archrival connected a field of international collaborators that revealed their own strategic responses to the forecast crisis. Business consultancies such as McKinsey & Company argue that with clear strategy there is no reason to fear uncertainty and responding to change can be used to one’s competitive advantage. In examining key projects by four of the Biennale collaborators, we consider that by utilising realistic and accurate strategies, these practices are able to look beyond the self-governed boundaries of practice, and ahead to new opportunities for the discipline, by actively contributing to a redefinition of the scope of architectural practice. Rather than being seen as interdisciplinary, these practices capitalise on their design expertise and reveal the potential for interdisciplinary work to become critically ‘ultradisciplinary’. We might define the ultradisciplinary architectural practice as one that is beyond or surpassing the previously specified extent, range or limits of practice.

In creating unique fussball players for Arena Calcetto, four collaborators linked to Gap Filler (Christchurch, NZ), Diatom Studio (Wellington, NZ and London, UK), CAN (Critical Architecture Network) (London, UK) and VisionArc (New York, US) offer exclusive insights into their own expanded views of practice. The first example occurred in the strategic pairing of Mark Leong (Gap Filler collaborator) and Tiago Rorke (Diatom Studio), who simultaneously explore new digital fabrication technologies and community activism. In their first joint venture, a hardwearing concrete and steel fussball team was created and shared online as open-source material for future replication. Leong is a collaborator with Gap Filler, who activate urban spaces in post- earthquake Christchurch. As an architectural ‘free agent’, his social-minded focus has been played out in renegade community works such as The Night Club for Gap Filler’s Playtime project (2012), a competition-winning scheme for a temporary outdoor cinema designed to activate one of many vacant blocks in a city undergoing a painful transition period.

The project is a critical urban intervention in Christchurch where, in the wake of the earthquake, architects wait for the ‘gold rush of reconstruction’, but neglect the urgent need for an immediate renewal of public space to avoid alienation from their own city. In his strategic involvement with the Biennale, Leong paired with Rorke of Diatom Studio – a small practice with a dual base in Wellington and London. Diatom’s interest lies in open-source digital fabrication and the potential to integrate designers, academics and online users with the design and making process. Echoed in the aesthetic of their metropolis- like fussball series, online projects such as SketchChair present cutting edge technology that embraces new opportunities for user-driven design, fabrication and customisation tools. Developed in collaboration with JST Erato Design UI in Tokyo, the project provides an open-source software tool that encourages the emergence of the user as co-author, while promoting the necessary role of the designer as facilitator, synthesiser and editor. Although operating at a small scale, both Leong and Rorke proactively explore potentials for community engagement and activation that preserve a critical future role for designers. Their facilitation of diverse community projects, whether urban regeneration or open-source digital design, strategically promotes the valuable application of their professional skills in response to contemporary conditions.

Working at a similar scale, CAN is a young, entrepreneurial practice within London’s bleak financial climate. The single object produced for the Australian Pavilion was a playful expression of CAN’s bold multidisciplinary approach, integrating fine art, architecture, furniture and graphics. Entitled Made by Many, the fussball object presents a meticulous composition of 1:100 scale human figures. Led by Mat Barnes and Eddie Blake, CAN mobilises specialists on a project-by-project basis. In creating the temporary signage system entitled Barbican Weekender Scenography (2012) CAN playfully implemented their spatial expertise within Europe’s largest multi-arts venue. Describing the graphic product as ‘scenography’, the project explored the creation of signage using ‘playful swarms of lo-fi electronics and parasitic floating signage’, juxtaposed against the Brutalist context of the Barbican. Having previously exhibited with other cultural giants such as Dezeen with Dezeen Platform in 2011, CAN demonstrate an atypical application of architectural skill, paired with their strategic alignment with dominant cultural institutions, in well-marketed public forums during an economic downturn.

Beyond the strategic effectiveness of these emerging practices, the final collaborator demonstrates the extraordinary potential for ‘interdisciplinary’ projects to increase the architect’s professional value. VisionArc’s graphically didactic fussball team represents the studio’s strategic global reach through cutting edge research projects. Design thinking has emerged as a valuable skill in the last decade and yet architects have been slow to understand or capitalise on the market. Founder Toshiko Mori and director Landon Brown operate VisionArc, a think tank dedicated to exploring ‘how designers might use this moment as an opportunity to catalyse their own transition into new modes of practice and broader fields of engagement’. Strategically operating as a research and visualisation consultancy, VisionArc mobilises design initiatives and fosters new and inspiring design futures through the integration of landscape, architecture,politics and science. Research is presented through engaging films such as Design Blind Spots 2050, commissioned by the DesignSingapore Council in 2009 as a speculative research project for the ICSID World Design Congress. The project coins the term ‘design blind spot’, a concept defined as ‘fields not currently known to integrate design thinking or strategy’. VisionArc outlines the enormous potential for designers to reframe global issues and new models of design practice by identifying and presenting solutions to global design blind spots. By designing how to facilitate collaboration itself, VisionArc suggest the key lies in the architect’s ability to operate across complex networks of stakeholders and policies, as well as to integrate competing ‘information silos’.

In dissecting the issue of oil sands mining in northern Canada, Design Blindspots 2050 presents a critical design future for architects, where by 2050 designers are sought out ‘as intermediaries capable of identifying blind spots across a wide spectrum of issues all crucial to the future of production, mobility and resources’. The project convincingly highlights the architect’s valuable role in global policy-making and development initiatives, demonstrating a critical future for architectural practice through extensive ‘ultradisciplinary’ projects.

The spectrum of practice represented by these studios underlines an expanding architectural profession. Instead of portraying a practice as outside of a professional boundary, we might consider the strategic value in actively promoting a wider and more marketable view of our discipline – one with greater opportunities for engagement. By determining realistic and strategic responses to economic, political, environmental and social conditions, and by operating in an ‘ultradisciplinary’ format, these practices are actively redefining the constructs of the profession and expanding the agency of architectural practice. Gap Filler, Diatom Studio, CAN and VisionArc are leading examples of professional advocacy and disciplinary adaptation across a range of scales, bringing about change from the level of the individual practitioner to the profession as a whole. The evolving profession must celebrate these examples as they walk the tightrope between artistic endeavour and business success.